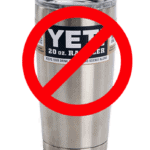 If you like your coffee piping hot, then this article is for you. Yeti cup competitors are giddy these days. If you haven’t heard; Yeti, who has historically been a big supporter of the NRA, recently in an attempt to cash-in on the anti-gun window of opportunity, dropped all ties with the NRA. Not surprisingly Yeti Cup Competitors are in fact the ones cashing in on Yeti’s mistake.

The first law of business is “Know Your Customers”. Apparently, Yeti has forgotten that law. Come to think of it, so have the Democrats and Hollywood, but that’s a different story. I guess what chaps my ass is Yeti flip-flopping from pro-gun customers to anti-gun customers. Did they really think that half of the country wouldn’t notice?

Anyway, back to HOT coffee. I like my coffee scalding HOT. That’s why I use insulated mugs. Up until yesterday, the Yeti Travel Mug was one of my favorite coffee mugs. Although I’m a Conservative and I’m a Coffee Roaster, I guess that makes me a Conservative Coffee Roaster. I’m OK with a company that may have a little left-leaning tendencies, as long as they’re putting their customers first. That’s not the case here. Yeti is abandoning their customer base. Fortunately for us, that’s OK.

Not surprisingly, the Yeti Cup Competitors are hot on their heels. Pelican, being well known for tough containers, gun cases, coolers, etc., also has a kick-butt coffee mug.

Over on our “Brewing Equipment” page, I’ve listed my favorite grinders, brewers, and yes mugs. You will notice that our review and recommendation for the Yeti Travel Mug is gone. In its place is the Pelican Rambler Coffee Mug. Head-to-head reviews show that the Pelican performs as well, if not better than the Yeti.

Get a load of this. The Pelican is just as good and it’s also less expensive. That’s right! The Yeti retails on Amazon for $29.99, yet the Pelican, which is nearly an identical product, retails for just $19.99.

Go ahead and give the Pelican a try and tell me what you think.