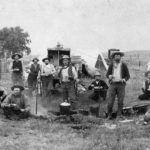 Spokane, WA (January 22nd) – Russell Volz, the owner and Coeur d’Alene coffee roaster of Lake City Coffee, is once again in the forefront of controversy by donating to the Go Fund Me campaign ‘We Build The Wall,’ which has so far raised over $20,000,000. Volz is donating $1 for each bag of coffee sold, with a goal of donating a total of $1,000.

This is not the first time that Lake City Coffee has put their caffeinated might behind patriotic campaigns. Nearly every year, the company makes donations to the NRA and GOP, as well as Christian and conservative organizations.

Not being one to avoid controversy, Volz is also boisterously boycotting stalwarts of social media: Google, Twitter, Facebook, LinkedIn, and Yelp. Yet despite bucking conventional wisdom, Lake City Coffee has managed to double sales the old fashioned way, one customer at a time.

Volz’s patriotic stance on the wall isn’t just a function of North Idaho conservative attitudes. Even though Lake City Coffee’s customer base is geographically dispersed across the country, a large majority of its customers enthusiastically support Trump’s security wall.

In recap; for each bag of whole bean coffee sold, Lake City Coffee is donating $1 to the Go Fund Me campaign “We Build The Wall”.

Lake City Coffee’s unique focus is on creating the smoothest coffee experience anywhere. They start with the highest quality Costa Rican Tarrazu Amapola beans that money can buy, and because freshness is the key, the beans are gently roasted and shipped the same day.