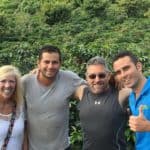 Mixing business with pleasure is one of the great perks of owning your own coffee roasting company. In January, Alisha and I went on the most amazing Costa Rican coffee tour. 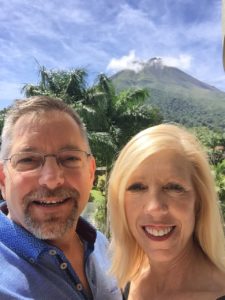 Why Costa Rica? Well as my world-traveling sister told me, Costa Rica is the Disneyland for Adults. Besides, they grow coffee there. Oh darn, I guess we’ll just have take a Costa Rica coffee plantation tour so we can write the trip off of our taxes.  Here’s what we did.

The Best of Costa Rica

Yet, the absolutist coolest thing we did was our Costa Rica coffee tour with Alan Rojas Cubero and the North Fields Coffee Tours.   Seriously, this tour was off-the-charts cool. 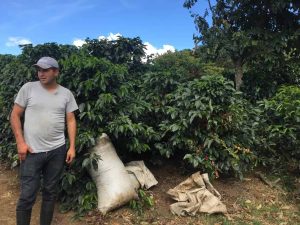 It all started with the concierge at the Royal Corin Resort in La Fortuna Costa Rica, who told Alan that we owned a coffee roasting company in Idaho and he’d have to do something special for us. And yes, just like Gilligan’s Island, Alan was wearing a stripped shirt and this was supposed to be just a 3-hour tour. For those of you who don’t know who Gilligan was, search YouTube for “Gilligan’s Island”. 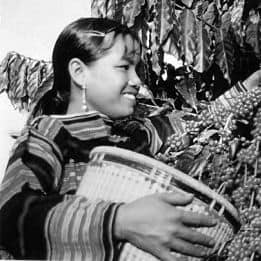 When we climbed into the van at 8:30AM, Alan asked if we had anything else planned for the day. We said no, and he said he was taking us to his cousin’s coffee farm on the other side of the country. He said, the long trip was worth it because, unlike other coffee farmers, Alan’s cousin Francisco Arrieta Brenes (Frank), owner of Vista Al Valle coffee farm, also owns the coffee processing equipment.

A One Man Show 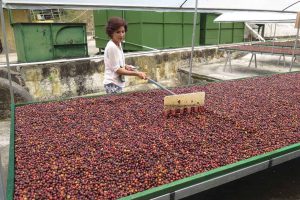 Frank on the other hand owns the land, hires indigenous pickers, processes the beans, dries them, bags them, and often sells them directly to coffee roasters like us.

Eventually, we arrived at Frank’s farm, elevation near 3,000 feet, with endless views to die for, we walked the very steep hillsides and met a family of indigenous pickers. The father couldn’t have been taller than 5’4” and weighing maybe 150 pounds wringing wet. And yet this guy dragged huge bags of coffee up and down steep hillsides all day long.

Along with several varieties of coffee plans, Frank offers three types of processing. 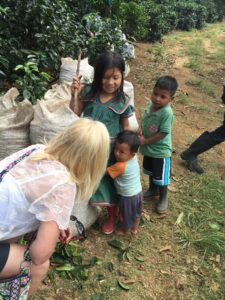 Sun drying is a process of mechanically stripping the skin off the berries; then washing the pulp off the berries with water; next sorting the beans; setting the clean beans out to dry; sorting them again; and lastly bagging the finished coffee beans.

In this process, the whole coffee berry is laid out to dry. After drying, the husk and pulp are lightly washed, leaving a naturally sweet coffee bean. 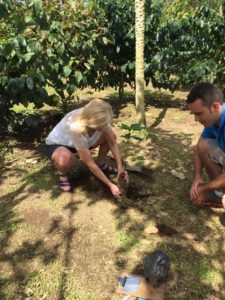 With Honey Drying, the skin is removed and only a small portion of the pulp is washed off. After drying, the beans are lightly washed again, leaving a slightly sweet honey taste to the coffee.

Then Frank and his team seemed to treat these coffee beans as if the fate of the entire world rested on their shoulders to produce the finest coffee in the land. Can you  guess why?  They do. Not surprisingly, Frank and his neighbors regularly win the cupping award for the best coffee in Costa Rica. 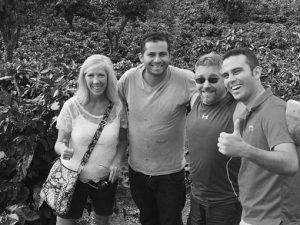 As a result, our Costa Rica coffee plantation tour concluded by planting a coffee plant with “Lake City Coffee” written on the plant’s tag.  Before leaving we had a cup of amazing coffee, received a half dozen sample bags of coffee beans, and some of the warmest smiles and firmest handshakes that you can imagine.

Finally, we arrived back to our resort around 9PM. The moral of this story is that next time someone signs you up for a three-hour tour make sure the Skipper isn’t wearing a stripped shirt.